On April 18, 2019, the United States won a critical dispute settlement case in the World Trade Organization (WTO) against China for not adhering to prior obligations to open its market to world agricultural grain trade. This marked the second consecutive WTO win for the United States in the last few months.

Specifically, the dispute settlement panel sided with the United States and found that China did not administer their tariff rate quotas (TRQs) for corn, wheat and rice in a way that was predictable, fair or transparent, which violated pledges that China made when it became a member of the WTO in December 2001. Instead, China offered TRQs to state-owned firms that had no intention of importing world grain at the lower, in-quota tariff rates. This helped support China’s domestic producers and accentuated China’s distorting high loan rates for corn, wheat and rice that started in 2007. In addition, China did not apply the same TRQ rules to non-state-owned firms that sought TRQ grain imports due to the heady $100/MT profits that were offered. The two-tiered TRQ import marketplace was unfairly controlled by the Chinese government. 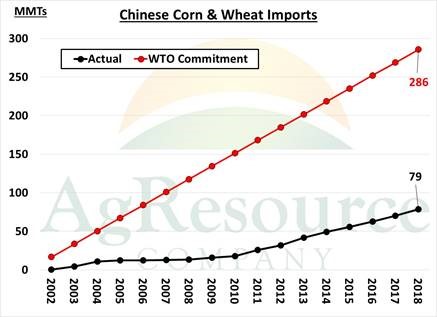 However, since 2002, China has imported just 79 MMTs of corn/wheat, or 27.6% of its pledged WTO commitment. This means that 89 MMTs (or 3.5 billion bushels) of corn and 116 MMTs (or 4.25 billion bushels) of wheat were not imported, which was one reason why U.S. and world grain stocks bulged following the maturation of biofuel demand in the United States and the European Union in 2013. Using an average price of $220/MT, AgResource calculates that China did not secure and import an estimated $45 billion of world corn/wheat over the past 16 years! Adding in lost rice trade would further downwardly skew world farm income.

This WTO case was originally filed by the Obama Administration in 2016, but was supported by the Trump Administration as they targeted China for unfair trade practices amid an expanding bilateral trade deficit. The WTO TRQ ruling should help the United States in its ongoing China trade negotiations, and the ruling reflects the importance of WTO in the trade dispute settlement process. However, it’s difficult to understand why it took 14 years for a developed agricultural exporter like the United States to call “foul.” This illustrates the need for an enforcement mechanism to make sure that China follows through with any future trade pledges. Unfortunately, any trade negotiations between the United States and China are unlikely to recover all the lost financial benefits that these potential annual China grain imports would have offered. This is one reason why world farmers need to constantly monitor and support the free-and-fair trade principles that are sponsored within the WTO.

Author Dan Basse is an agricultural economist and president of AgResource Company. He has been in the commodity business since 1979, providing research and insight around the globe.

Register today for the April 30 conference, Agriculture Trade in a Time of Uncertainty, hosted by Farm Foundation’s Food and Agricultural Trade Resource Center.