A Conversation with the Secretaries 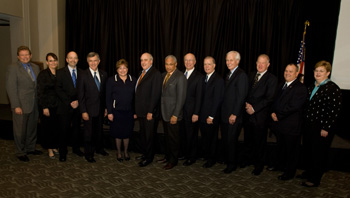 WASHINGTON DC: Seven former U.S. Secretaries of Agriculture offered advice to the new leadership of USDA and perspectives on the challenges facing agriculture today in a ”Conversation with the Secretaries” at the Food and Agriculture Policy Summit Wednesday on  Dec. 3, 2008, in Washington D.C. The Summit was a collaboration of Farm Journal and Farm Foundation.

At this historic gathering, the former secretaries offered advice and insight on what the next U.S. Secretary of Agriculture should expect. The former secretaries also discussed the top challenges facing U.S. agriculture, including energy, market volatility, food safety, the tightening of credit and the food, fuel and financial situation as major problems.

The former secretaries who participated include:

Here is a link to C-Span coverage:

http://www.c-spanarchives.org/library/index.php?main_page=product_video_info&products_id=282668-1Just click on the button in the “flash” box on the right of the screen and the video will load and play. It is best viewed on a high-speed connection.

A 98 minute video of the entire event may be viewed online with Windows Media Player or downloaded as an mpeg4 file for later viewing.